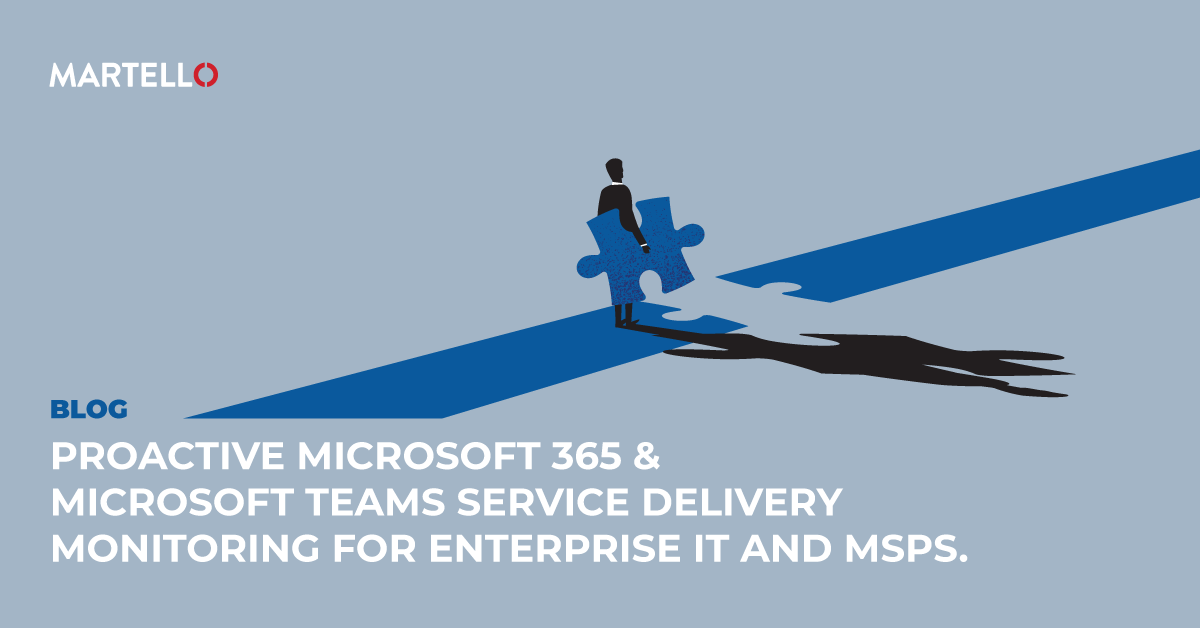 Providing an effective service – especially in a world with constantly evolving needs – goes beyond standard operating hours. Imagine if a bank only kept your investments secure while they were ‘open’ during their hours of standard operation? Issues can arise at any time and having effective service delivery monitoring and support for enterprise’s IT teams and managed service providers is critical. This blog will examine how Martello’s solution provides proactive Microsoft 365 and Microsoft Teams service delivery monitoring and support to help maintain the productivity of your organization.

While Microsoft’s Call Quality Dashboard is useful for providing data about user’s functionality, it only provides this information when users are actually using Microsoft Teams and is limited to calls only. The Microsoft Connectivity tool offers valuable network path data but is unable to alert and/or correlate data to determine the root cause of potential issues and synchronize that data with the ITSM. In short, Microsoft can provide key parts of the data puzzle but extra visibility would only serve to equip the organization with more data to make better proactive choices to support the service delivery for your business. This is where Martello’s solution comes in.

Taking a proactive approach is the best way to mitigate the effect of issues if/when they occur. Martello’s DEM solution offers proactive monitoring 24/7 across all Microsoft Teams features and other Microsoft 365 workloads.

What helps Martello’s users stand apart from the competition? Clear visibility of the service delivery and performance of Microsoft Teams’ for the specified user(s) and other Microsoft 365 workloads 24 hours a day, 7 days a week. If you’re only finding out about an issue that affects your Teams’ call quality after you’ve made an important call your business has already been negatively impacted. For MSPs, being able to proactively remediate an issue before it affects your end-users is critical. But it’s never too late to improve your visibility and monitor your Microsoft 365 service performance to ensure the best quality possible. Learn more about our Microsoft Teams monitoring solution and download our Teams performance cheat sheet here.

Why Teams Performance Monitoring is More Than Just Measuring Uptime

When your organization’s very ability to share, collaborate and meet depends on Microsoft Teams performing, solely watching Teams service availability simply isn’t enough. Employees operate on the assumption that every bit of technology they rely on just works.  Teams is the modern example of the most critical application to businesses today, with over 145 million daily active users. But even though it is part of the Microsoft 365 platform, it still represents a technology solution internal IT teams are responsible for. And that presents a huge problem. Effective Microsoft Teams performance monitoring is necessary.

Take the example of a customer of ours whose headquarters is in the downtown of a major U.S. city and has 7 floors of nothing but meeting rooms, with IT located in the basement. The only time IT even knew there was an issue with Teams was when the employee tried to use Teams unsuccessfully at the meeting time. That’s never a great experience for the user or IT.

The challenge is for each meeting room, there were so many factors that could the reason for a Teams performance issue: it could be the meeting room computer, the network switch, the cabling, an issue with network routing, authentication issues, and all the services Teams relies on including Azure AD, SharePoint, OneDrive, Exchange, and more.

Internal IT teams traditionally only have visibility into the overall status of the Teams service; there’s the Microsoft 365 Service health status site and the Microsoft 365 Status account on Twitter.  But all those do is measure one metric – uptime – of a very multi-faceted scenario where literally anything technically sitting between the meeting room computer and Teams can be the problem.

For those organizations heavily relying on Teams, the goal is not just for it to function, but to perform well – and that includes meetings, collaboration, chatting, integrations, access to files, and more. So, it’s necessary to look beyond just the uptime of the Teams service and look for ways to get deeper visibility into what parts of the path from endpoint to Teams may be causing the problem.

Today, there are a number of monitoring technologies available that can assist in both provide the needed visibility and help to isolate the root cause of not just outage issues, but even Teams performance issues. These include:

Monitoring Teams for performance reasons requires much more focus on two factors:  first, whether your users are experiencing a Teams issue, and second, what is causing the issue. While there’s little you can do when problems occur on the Microsoft side of thing (other than to inform your users of the problem), having visibility into everything else used to get the user connected to Teams opens up a whole range of possibilities around providing better – and more proactive – service delivery of Teams. Learn more about how to optimize Teams performance by downloading our ultimate Microsoft Teams performance guide here. 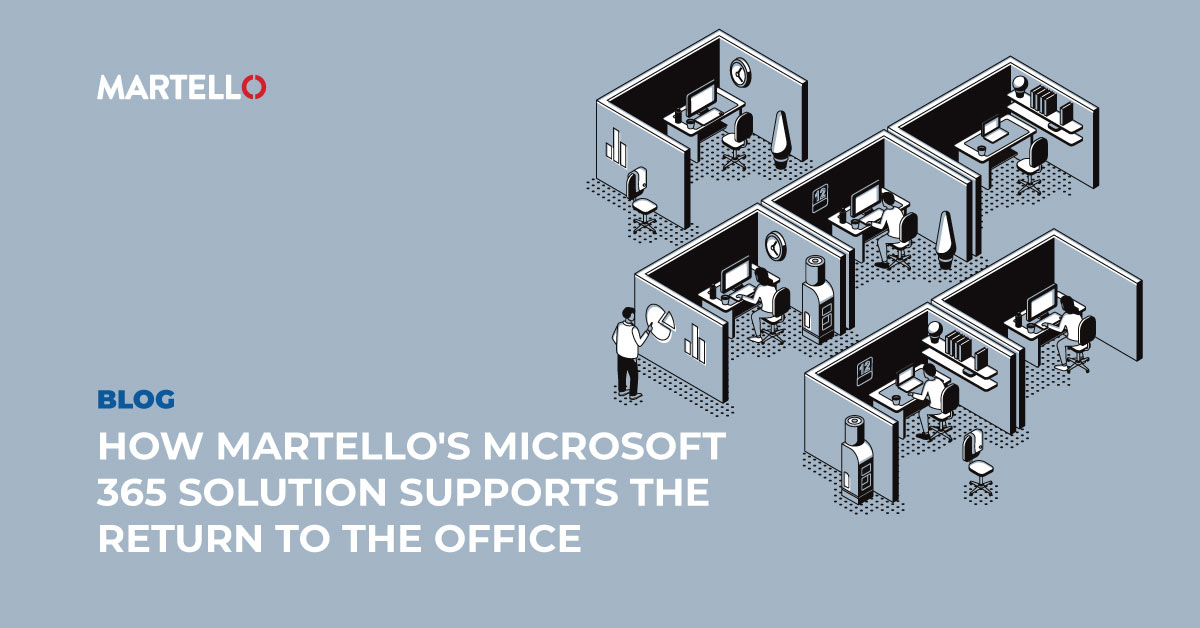 The global COVID-19 pandemic caused a massive and immediate shift to remote work which was bolstered by video conferencing telecommunication software such as Microsoft Teams. Although the world is still trying to heal (while simultaneously navigating new and evolving challenges) some organizations have started the process of having their employees return to work and explore new hybrid workforce environments. However, this presents its own set of unique challenges, mainly that with an influx of employees once again relying on the corporate network it may cause said network to be impacted, leading to issues with the users’ experience. This blog will examine how Martello’s solution helps make the use of Microsoft 365 services in the return to the office as effective as possible.

While Microsoft provides a manual method to manually check the route to the cloud and the performance of their Microsoft 365 services via their Microsoft Connectivity Tool it is limited in the information it provides. For instance, it does not provide 24/7 testing, there are no alerts for the quality of the service as a whole, or alerts for the individual user who may be having a problem. The data it does provide can be quite useful but it’s important to have improved visibility to fill in the gaps. That’s where Martello’s solution can help. The following outlines the steps our solution takes to help users achieve a less interrupted and more productive experience.

The return to work/hybrid work environment is going to be navigated differently based on each individual business and their needs but what bonds everyone together is a desire to remain as productive as possible, and that requires a proactive solution that provides round the clock service monitoring and testing 24/7 and visibility into issues that can impact the user experience. Download our latest eBook to learn more about how Martello can help you optimize the performance of Microsoft 365 in the modern workplace here.