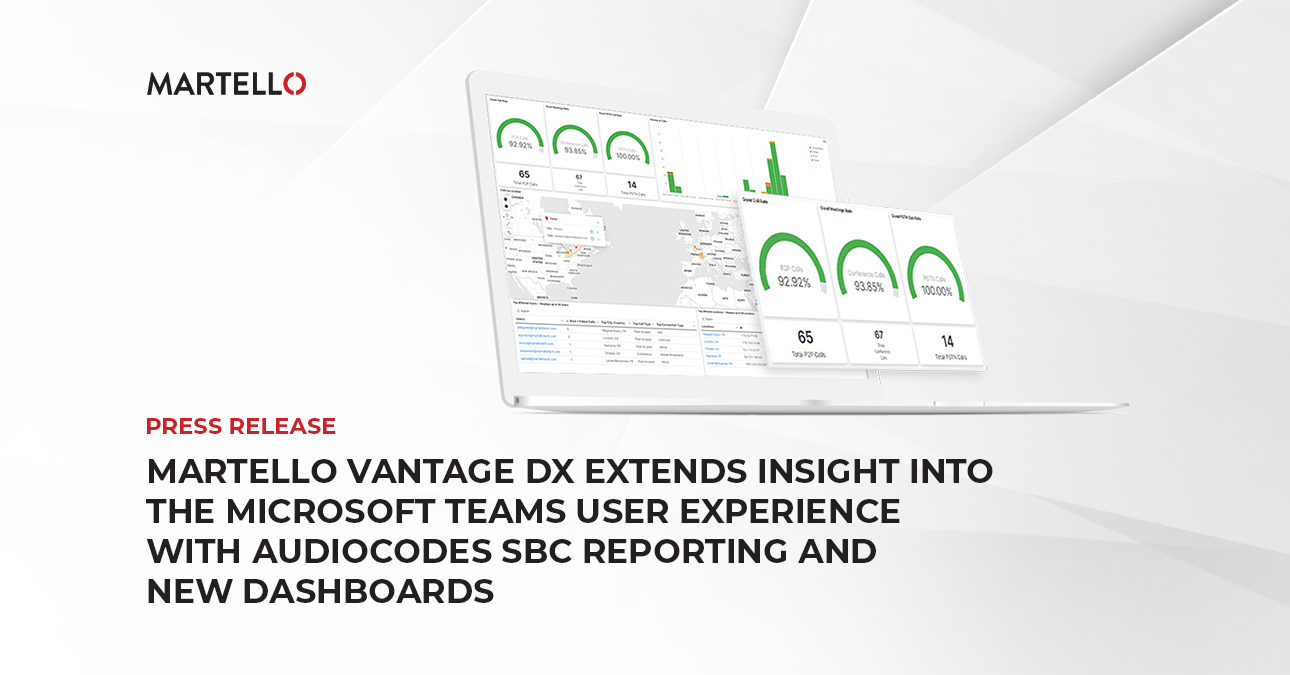 Microsoft Teams is the world-leading collaboration and productivity tool for today’s hybrid workforce with more than 270 million monthly active users, and more than 12 million of these users now make voice calls using Microsoft Teams Phone across VoIP and PSTN. In a January 2022 report, Gartner predicted that by 2024, 20% of total Microsoft Teams active users will adopt telephony services for external calling on Teams.

The users’ experience with Microsoft Teams is only as good as the network and IT environment it operates in. There is a critical visibility gap when it comes to delivering a stellar Microsoft Teams user experience; organizations lack an end-to-end picture of what problems are happening, what is causing the problems and who is affected. This challenge becomes even more pronounced in Microsoft Teams Phone environments, with PSTN, SBCs, Internet Service Providers (ISPs), network architecture and siloed IT teams all increasing the complexity of service delivery.

Today’s release of the Microsoft-recommended Vantage DX monitoring and optimization SaaS for Microsoft Teams and Microsoft 365 takes aim at this problem, with deeper visibility into the most critical issues impacting users, to eliminate guesswork and resolve problems faster. New features in Vantage DX V3.7 include:

Customer Berry Bros. & Rudd, a British wine and spirits merchant chose Vantage DX to get the visibility they were previously lacking into the Microsoft Teams user experience. “Often users don’t report a poor experience, they simply grow accustomed to subpar calls”, said Chris Brown, Head of Service Delivery for Berry Bros. & Rudd. “After deploying Vantage DX, not only were we able to more quickly identify the cause of user-reported problems, but we were also able to use the dashboards in Vantage DX to see which users were having a consistently poor experience. This meant we could proactively address the problems impacting these individuals and offer them a better, more productive user experience”. Read the Berry Bros. & Rudd Case Study.

“Martello’s longstanding expertise in unified communications performance analytics has helped us differentiate Vantage DX as the tool of choice for managing the Microsoft Teams Telephony user experience”, said John Proctor, President and Chief Executive Officer of Martello. “Working with Microsoft and its Operator Connect partners we are continuously expanding the capabilities of Vantage DX to ensure it meets the unique needs of enterprise IT teams providing their users with external Teams calling.”

Microsoft is a Gold certified Microsoft Partner and its Vantage DX software is a Preferred Solution on the Microsoft Azure Marketplace.

Martello Technologies Group Inc. ( TSXV: MTLO) is a technology company that provides digital experience monitoring (DEM) solutions to optimize the Microsoft Modern Workplace. The company’s products provide actionable insight on the performance and user experience of cloud business applications, while giving IT teams and service providers control and visibility of their entire IT infrastructure. Martello’s software products include Vantage DX, which provides Microsoft 365 and Microsoft Teams end user experience monitoring and optimization. Martello is a public company headquartered in Ottawa, Canada with employees in Europe, North America and the Asia Pacific region. Learn more at http://www.martellotech.com

Neither the TSXV nor its Regulation Services Provider (as that term is defined in the policies of the TSXV) accepts responsibility for the adequacy or accuracy of this news release.